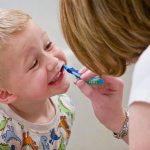 This is Part 2 of a 6 Part series. The info will be best understood if read in order. Click here for Part 1

Today we’re talking about tooth brushing and flossing and how they absolutely DO NOT PREVENT ALL CAVITIES.

Many moms are surprised to learn this fact, especially if they are award-winning champion tooth brushers. And BTW, you’re seriously in the 1% if you actually PROPERLY floss your 3-year-old’s teeth.

This is all about colonies and colonization by microscopic bacteria (plaque). This is the very reason for brushing and flossing – and maybe even “some” mouthwashes. We’re going to learn to kill the colonists before they damage our kids.

As a general comment, cavities are caused by 2 major factors:

Note that first one: undisturbed colonies of plaque bacteria for at least 7 days. Is your kid going to get a cavity if you forget their toothbrush on a weekend campout? Nope. Missing brushing for a couple of days is only likely to cause inflamed gums called gingivitis (a topic for another day). 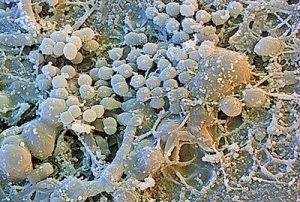 Plaque is actually a little sticky and NOT soluble in water. That’s why rinsing alone won’t remove or kill plaque. The bacteria manufacture their own sticky substances that make them stick to hard objects, not just teeth (braces, retainers, or Invisalign for example). If left to colonize for 7 days, they can produce enough acid to eat holes in your kid’s teeth.

Here’s the good news. Plaque is generally the consistency of mayonnaise so it’s really not hard to wipe off at all. You can wipe it off with a tissue, a soft cloth, or even your own finger. But it turns out that for most circumstances a toothbrush is best for the parts of the teeth you can see, while floss is best for the areas of the teeth that touch each other. You DON’T need a hard toothbrush and you DON’T need to scrub so hard it makes their gums bleed. But you DO need to do more than just rinse.

Here’s why all the brushing and flossing in the world can’t prevent all cavities.

SOOOO, the plaque hides undisturbed not just for 7 days but for months and even years. Give that plaque the right food, such as sugar (really any simple carb, but sugar gets the bad rap), and you’ve got enough acid forming to eat a hole into the tooth, YOUR CHILD’S TOOTH.

OK, so you just took an oath to yourself to do better, but it still won’t be good enough. Sucks, huh!

There are very tiny places in your child’s tooth that are so small even a single bristle of a toothbrush can’t get into them and clean them out. We call these pits and grooves. They’re on the biting surfaces of back teeth, the sides of back teeth, and sometimes on the inner surface of upper front teeth.

Even though these pits are too small for a toothbrush, they’re the size of the Grand Canyon to a bacteria. They carry on and produce acid like crazy if they’re given the simple carbs they love.

I call these spaces “hotels for bacteria” because they get to hide in there, protected from the brush, and run amok like bacteria parties are wont to do (think Minions on a bacteria-sized scale).

The point is that brushing and flossing is great and should be done every day. Even more important, it should be DONE WELL every day. As a REAL MOM you should be a great homewrecker for bacteria and wipe out those microscopic colonies that you can get to. Your kids teeth will thank you … actually, they probably won’t (they can’t talk).

But don’t think you’re going to stop cavities in the pits and grooves of teeth with a toothbrush, but there’s hope. There are other methods we have to use to kill the bacteria there. More on that another day.