If You Did This To Your Child’s Knocked Out Tooth You Would Mess Up Everything! 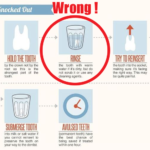 One of the REAL MOM’S out there suggested I look at some of the dental advice on Pinterest. Boy, am I glad I did.

Have you ever heard the expression about learning something “by osmosis?” Well, it’s important to learn something “about” osmosis. It may make all the difference in saving your child’s healthy and happy smile.

I saw some really dangerous advise given on one of the info graphics about emergency dentistry. I screen captured only part of it, specifically NOT including the dental office as I don’t want to embarrass them. Here’s the part I grabbed (and yes, the red markings  saying WRONG are mine).

Here’s the problem. When a child’s tooth is knocked completely out of its socket (called an Avulsed tooth), the most important thing to know is that it’s usually possible to save that tooth for life.

However, there’s a big IF (or two or three):

Do not rinse the roots of knocked out teeth with plain water of any kind, whether from a tap or bottled water. It will speed up the death of the ligament cells still attached to the root.

Do you see why the second part of the infographic is so dangerous? It’s all about OSMOSIS. Wikipedia’s definition is pretty accurate.

The ligament cells still viable on the roots of knocked out teeth have membranes around them (semi-permeable it turns out). The inside of the cell has a higher concentration of solutes (the stuff dissolved in a liquid solution) than water (the solvent in this case). So if you rinse these ligament cells with plain water, osmotic forces will cause the plain water to move into the cells, diluting the solution inside, and actually blowing up the cell membranes.

It’s like if you just kept filling and filling a water balloon. Eventually it will pop. No Bueno.

The reason any type of cow’s milk is great for transporting the tooth to the dentist, while it’s out of its socket, is because it has a similar osmotic tension to your inner body where those ligaments normally exist in the mouth. Now you know. NEVER put plain water of any type on a knocked out tooth. As gross as it sounds, spit is better because it also has the right osmotic tension.

For better info on how to get the best results for treating a knocked out tooth, check out our Emergencies section, and in particular, this page.