Would You Rather Your Teenage Child Have A Permanent Tooth Pulled Or Root Canal? 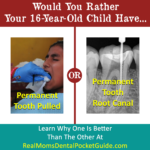 It’s a tough decision when your teenage child has a permanent tooth with a cavity deep enough that it infects the living tissue in the center of the tooth (the pulp). Your only long-term health option is to remove the infected pulp tissue. You can do that and still leave the hard part of the tooth in place (root canal) OR you can have the tooth pulled, which also removes the infected pulp.

Most people think of the financial cost. If you choose to have a root canal, not only do you have to remove the infected pulp for the health of the body, but you also have to structurally repair the damaged hard part of the tooth to stand up to the mechanical load of chewing. These two procedures, root canal followed by a crown, can cost upwards of $3000 to $4000… and that’s for just one tooth.

But both will have long-term consequences so long-term thinking is critically important, but each option also has its pros and cons. Neither option is always right or always wrong.

I’ve seen dentists do root canals in teeth that never should have had them done. In fact, it happened to me when I was taking my dental board exam where the patient was supplied by another dentist. I had to have a patient to demonstrate I knew how to restore a badly decayed tooth with a foundation (core or post/core) and a crown (some people call them caps). I had never met this man before.

When the patient arrived, I removed the temporary filling materials placed after the root canal had been done by a specialist (an endodontist is what you call a dentist who specializes in root canals). The very sad part was that the hard structure of the tooth was so decayed that it was almost impossible to repair well. The cavity went far below the gumline where bleeding can become a hindering factor in repair. It’s like trying to build a building with materials that require dryness… only it’s pouring rain. When you repair a tooth under those conditions, the long-term success of the repair can be greatly compromised. Both the dentist and the endodontist should have known better. Grrr.

So if this was happening on YOUR teenage child, what would you choose? I know I would NOT spend $4000 for something that would only last a few years. If this happened to my child, I would instead have the tooth pulled. But now we have the problem of a BIG gap.

The most common tooth for a teenager to require a root canal is a first molar, and those four first molars are the largest teeth in their head. They come into the mouth at 6 years old when tooth brushing and flossing can be poor and sugar consumption is high. Of all the teeth dentists end up doing root canals or pulling the tooth, first molars are number one by far. Pulling one of these leaves quite the gap.

The good news is that during the teenage years, you can often involve an orthodontist to use braces to move teeth around. In fact, sometimes pulling a badly decayed first molar can let the other molars behind it move forward into the empty space. This often means not having to have the wisdom tooth removed in that part of the mouth.

This option can cost less than a root canal and crown, but with braces involved it might even cost more. Whatever the financial cost, it’s still the best long-term health choice to remove an unrepairable permanent tooth and then use all the other dental tricks to put things back together. The pain you feel in your bank account is soon forgotten, but the pain of long-term dental nightmares can last your child’s whole lifetime.

ON THE OTHER HAND, sometimes the best long-term plan for a tooth that requires a root canal for health may be to actually do the root canal and crown, all $4000 worth. If the tooth is repairable with good long-term expectations, and the tooth is in a good position orthodontically, then fix the tooth. Again, regardless of financial cost, this option will have the least health and lifestyle costs… which is what long-term thinking is all about.

How do you know the difference when the stakes are so high either way? You get good advice. Some dentists are phenomenal and have great wisdom and judgment. Then there are the other type that you should avoid like the plague.

Learn how to avoid costly mistakes, both financially and dental-health-wise, by watching this video.